George Dethlefsen, Chief Executive Officer of Corsa, commented, “Corsa made excellent progress towards its growth objectives in the second quarter.  The Acosta Mine successfully opened in early June and is progressing according to plan with favorable geology and productivity levels.  Metallurgical coal production at the NAPP Division was at the highest level in two years, driven largely by outstanding productivity at the Casselman mine.

Corsa’s Sales & Trading platform achieved its fifth consecutive quarter of at least 20% sequential volume growth for sales of metallurgical coal.  We are pleased to have picked up two new orders from domestic customers in the quarter and now expect a fairly balanced order book between domestic and international sales in the months ahead.  As a result of the progress of our sales efforts, today we are increasing 2017 metallurgical coal sales guidance by approximately 20%.

We are thrilled to announce that we will soon begin rehabilitation work at the Horning Mine near Somerset, Pennsylvania.  This project involves re-opening a mine that has been idled for five years, and marks the second mine opening project that Corsa has begun in the last year.  The project is consistent with our strategy of increasing capacity utilization at company-owned preparation plants in Pennsylvania.

Looking forward, we remain focused on both metallurgical coal production growth and growth in Sales & Trading volumes.  Production from the Acosta Mine will ramp up over the third and fourth quarters of this year.  We are currently evaluating additional expansion opportunities from our portfolio of projects located within economic trucking distance of our coal preparation plant capacity in Pennsylvania. Finally, we are evaluating ways to deploy the free cash flow that the business is generating.  Production growth, acquisitions, and deleveraging remain strategic priorities.” 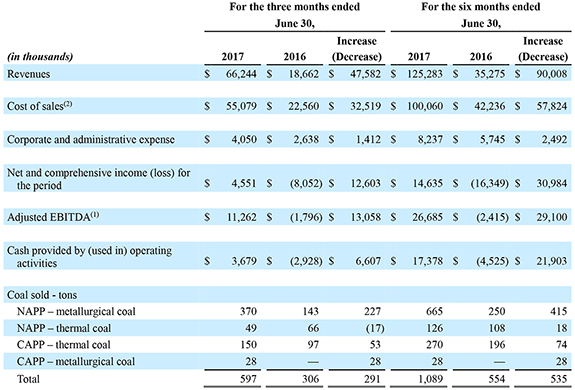 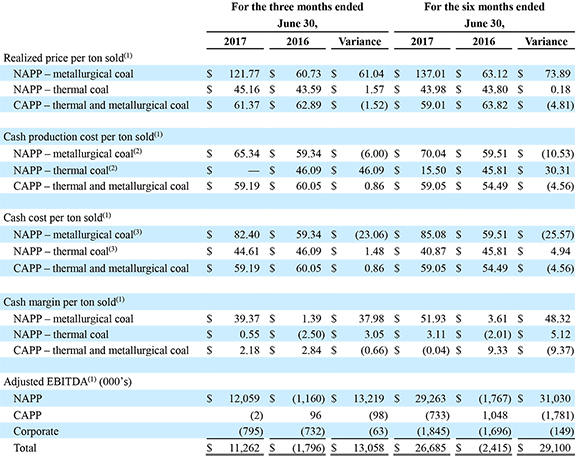 Corsa’s updated guidance for the year ending December 31, 2017 is as follows:

(all tonnage in short tons) 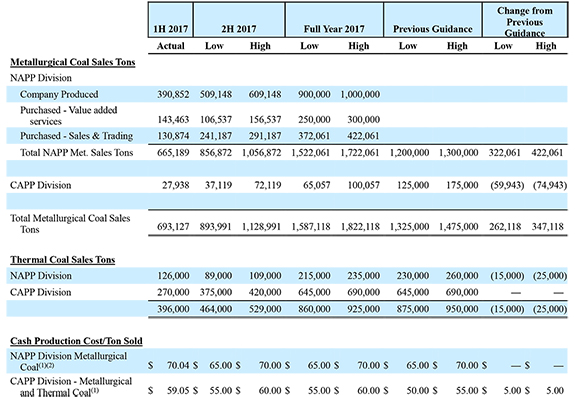 Metallurgical coal prices declined from record levels in April 2017 after the Australian export terminals returned to service after the impact of Cyclone Debbie.  In the second quarter of 2017, prices reversed course and have risen by more than 20%, as Chinese metallurgical coal miners have announced intentions to reduce output in response to seaborne prices breaching the $140/mt FOB terminal price level.  We view this move as a reflection of the cost curve for producing metallurgical coal in China and as a significant marker for estimating a long range metallurgical coal price.  Additional supply interruptions in Australia and the United States occurred in July which pushed spot prices higher.  These moves in aggregate continue to suggest that the global supply chain for metallurgical coal remains fragile and prone to disruption.

On the demand side, the steel industry is enjoying profitable prices globally and production growth has been robust in the first half of 2017, with global crude steel production up 4.5% year-to-date through June.  Multiple catalysts for continued strong steel pricing and production levels exist in the second half of 2017, including healthy margins for Chinese and U.S. steel producers, a strong economic outlook, the potential for increased infrastructure spending in the U.S. and China, the potential for steel import tariffs in the United States, and the potential for higher blast furnace utilization rates in the United States.

Corsa’s geographic proximity to over 50% of domestic coke production capacity and short rail distance and multiple options to access the Maryland and Virginia export terminals will continue to solidify Corsa’s ability to serve both domestic and international customers.  Our sales and trading platform operations also give us the ability to market a greater variety of products, access more users and increases our ability to respond to market-shaping events.

Corsa’s metallurgical coal sales in 2017 from its NAPP Division are expected to be in the range of 1,522,061 to 1,722,061 tons. Actual sales will depend on customer demand and market conditions.

Corsa’s thermal coal sales in 2017 from its NAPP Division are expected to be in the range of 215,000 to 235,000 tons and are expected to be primarily filled by coal purchased from third parties.  We do not expect to sell internally-produced NAPP Division coal in the thermal market in 2017.  Actual sales will depend on customer demand and market conditions.

The CAPP Division mineral reserve base exclusively consists of high BTU and high carbon content coal. These unique qualities, combined with advantaged logistics, set the CAPP Division apart from other producers and create a niche in the utility and industrial marketplace.

Refer to Corsa’s unaudited condensed interim consolidated financial statements for the three and six months ended June 30, 2017 and 2016 and related Management’s Discussion and Analysis, filed under Corsa’s profile on www.sedar.com, for details of the financial performance of Corsa and the matters referred to in this news release.

Results of Annual and Special Meeting of Shareholders

Corsa is pleased to announce that at the Meeting, the following eight nominees set forth in the management information circular of Corsa dated June 27, 2017 were re-appointed as directors of the Company to hold office until the close of the next annual meeting of Corsa’s shareholders or until his successor is duly elected: Robert C. “Bo” Sturdivant, John H. Craig, Alan M. De’Ath, George G. Dethlefsen, Arthur Einav, Robert Scott, Ronald G. Stovash and Kai Xia. In addition, Urish Popeck & Co., LLC, Certified Public Accountants, were appointed as auditors of Corsa and shareholders approved and ratified minor amendments to Corsa’s existing stock option plan in the form of a second amended and restated stock option plan in accordance with the requirements of the policies of the TSX Venture Exchange.

The estimated coal sales, projected market conditions and potential development disclosed in this news release are considered to be forward looking information.  Readers are cautioned that actual results may vary from this forward looking information.  Actual sales are subject to variation based on a number of risks and other factors referred to under the heading “Forward-Looking Statements” below as well as demand and sales orders received.

Forward-Looking Statements
Certain information set forth in this press release contains “forward-looking statements” and “forward-looking information” under applicable securities laws. Except for statements of historical fact, certain information contained herein relating to projected sales, coal prices, coal production, mine development, the capacity and recovery of Corsa’s preparation plants, expected cash production costs, geological conditions, future capital expenditures and expectations of market demand for coal,  constitutes forward-looking statements which include management’s assessment of future plans and operations and are based on current internal expectations, estimates, projections, assumptions and beliefs, which may prove to be incorrect. Some of the forward-looking statements may be identified by words such as “estimates”, “expects” “anticipates”, “believes”, “projects”, “plans”, “capacity”, “hope”, “forecast”, “anticipate”, “could” and similar expressions. These statements are not guarantees of future performance and undue reliance should not be placed on them. Such forward-looking statements necessarily involve known and unknown risks and uncertainties, which may cause Corsa’s actual performance and financial results in future periods to differ materially from any projections of future performance or results expressed or implied by such forward-looking statements. These risks and uncertainties include, but are not limited to: risks that the actual production or sales for the 2017 fiscal year will be less than projected production or sales for this period; risks that the prices for coal sales will be less than projected; liabilities inherent in coal mine development and production; geological, mining and processing technical problems; inability to obtain required mine licenses, mine permits and regulatory approvals or renewals required in connection with the mining and processing of coal; risks that Corsa’s preparation plants will not operate at production capacity during the relevant period, unexpected changes in coal quality and specification; variations in the coal mine or preparation plant recovery rates; dependence on third party coal transportation systems; competition for, among other things, capital, acquisitions of reserves, undeveloped lands and skilled personnel; incorrect assessments of the value of acquisitions; changes in commodity prices and exchange rates; changes in the regulations in respect to the use, mining and processing of coal; changes in regulations on refuse disposal; the effects of competition and pricing pressures in the coal market; the oversupply of, or lack of demand for, coal; inability of management to secure coal sales or third party purchase contracts; currency and interest rate fluctuations; various events which could disrupt operations and/or the transportation of coal products, including labor stoppages and severe weather conditions; the demand for and availability of rail, port and other transportation services; the ability to purchase third party coal for processing and delivery under purchase agreements; and management’s ability to anticipate and manage the foregoing factors and risks. The forward-looking statements and information contained in this press release are based on certain assumptions regarding, among other things, coal sales being consistent with expectations; future prices for coal; future currency and exchange rates; Corsa’s ability to generate sufficient cash flow from operations and access capital markets to meet its future obligations; the regulatory framework representing royalties, taxes and environmental matters in the countries in which Corsa conducts business; coal production levels; Corsa’s ability to retain qualified staff and equipment in a cost-efficient manner to meet its demand; and Corsa being able to execute its program of operational improvement and initiatives. There can be no assurance that forward-looking statements will prove to be accurate, as actual results and future events could differ materially from those anticipated in such statements. The reader is cautioned not to place undue reliance on forward-looking statements. Corsa does not undertake to update any of the forward-looking statements contained in this press release unless required by law. The statements as to Corsa’s capacity to produce coal are no assurance that it will achieve these levels of production or that it will be able to achieve these sales levels.