December 10, 2018 – Canonsburg, Pennsylvania - Corsa Coal Corp. (TSXV: CSO) (“Corsa” or the “Company”), a premium quality metallurgical coal producer, today announced its guidance for 2019(1) and the extension of the maturity date of the term credit facility with Sprott Resource Lending Corp. from August 19, 2019 to August 19, 2020.

“In 2018, Corsa advanced several strategic priorities that position the business well for future success in 2019 and beyond,” said George Dethlefsen, Chief Executive Officer of Corsa.  “We completed the ramp-up of the Acosta deep mine, made significant progress on the development of the Horning mine, developed the northeastern reserve base at the Casselman mine and completed a face mining equipment upgrade cycle – a move that will reduce capital expenditures in the coming years while also reducing repair and maintenance expenses and improving productivity.  Additionally, we divested the thermal coal-producing Central Appalachia division to become a pure play metallurgical coal producer.  While accomplishing these objectives, we also expect to have increased Company Produced(2) metallurgical coal sales levels by 23% and will have grown overall metallurgical coal sales 29% by the end of 2018.

In 2019, we are forecasting Company Produced metallurgical coal sales to increase by 33%, as the Casselman and Acosta mines are producing at full capacity and as we ramp up our Horning and Schrock Run mines.  We are guiding to cash production costs per ton sold(3) of $78 to $82 in 2019, reflecting reduced costs per ton sold at both Casselman and Acosta and benefiting from the lower cost profile of our Schrock Run surface mine.  In 2019, we expect to begin development work at our Keyser mine in Somerset County.

We have grown the Company at a rapid pace since 2016, increasing metallurgical coal sales by nearly 190% and increasing company produced metallurgical coal sales by 49%. Even after this progress, we believe we are only in the fifth inning of our growth story.  Finishing the Horning mine development, beginning the Keyser mine and beginning the North mine are all key pieces to our long-term strategy of lowering unit costs by increasing capacity utilization at our preparation plants and achieving the financial benefits of scale.

The market for metallurgical coal remains very well-supported largely due to limited production growth globally over the past several years and healthy demand from steel producers.  Supply of low volatile metallurgical coal is particularly tight in the marketplace, given recent supply events.  The forward curve for 2019 currently projects an average price for premium low volatile metallurgical coal of $190.25 per metric ton FOB vessel.  Using a $190 per metric ton FOB vessel price outlook, we expect to generate between $13 and $15 million of net and comprehensive income and $42 and $46 million of Adjusted EBITDA(3) in 2019.  We are looking forward to capitalizing on the opportunity ahead of us in 2019.”

Our 2019 budget is focused on producing coal at our three underground mines and is benefited by a full year run rate at the Acosta mine and more favorable mining conditions at the Casselman mine.  The Horning mine is expected to exit the development phase and is expected to produce a low-ash, premium quality metallurgical coal.  In early 2019, we expect to begin production at the Schrock Run surface mine which is expected to be the Company’s lowest cost mine.

Increasing capacity utilization rates at our infrastructure remains a strategic priority for the Company in 2019 and part of the long-term growth plans.  The Company’s processing plant facilities have the capacity to double throughput with increased volumes from our company produced tons and value added services tons.  Corsa has four million tons of annual processing capacity connected to rail sidings on both the CSX and Norfolk Southern railroads.  Purchasing coal locally and then storing, washing, blending and loading the coal generates margin, as Corsa uses its customer relationships, infrastructure and logistics capabilities to enable regional producers to access the export market.

The Sales and Trading business line provides significant intangible benefits that help the Company drive volume growth and increases its presence in the seaborne market, as well as in the domestic purchased coal market.  This helps the Company offer its customers a wide range of coal qualities and creates a margin stream that Corsa believes will be available in any pricing environment.

At present, we have priced 39% of our 2019 low volatile metallurgical coal order book, including 650,000 tons of domestic business that is priced at an average of $112 per ton FOB mine.  Currently 59% of 2019 forecasted low volatile volumes are committed.  We expect our sales order book to have good diversification, with roughly equal shares of volumes being fixed, priced off the Australian index and priced off of the Platts U.S. East Coast index.  We forecast approximately 71% of 2019 volumes to be exported and 29% to be sold domestically.

Corsa’s guidance for the year ending December 31, 2019 is as follows: 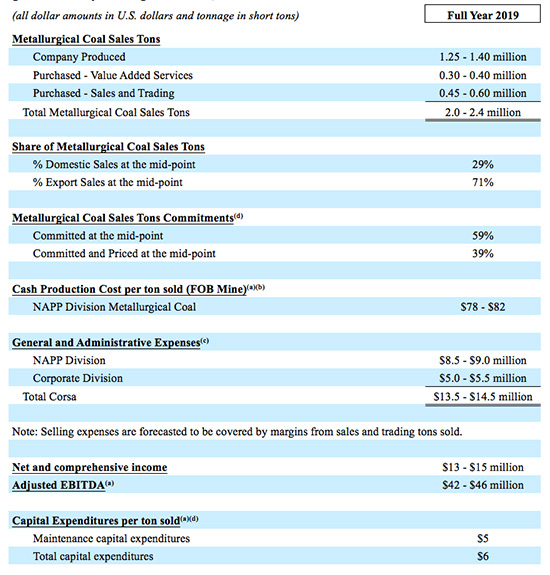 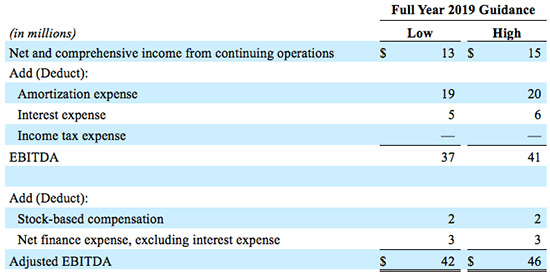 The Company’s wholly-owned subsidiary, Wilson Creek Holdings, Inc. (“WCH”), has entered into an amending agreement to extend the maturity date of its term credit facility from August 19, 2019 to August 19, 2020 and to amend certain other terms of the credit agreement (the “Credit Agreement”) governing its term credit facility made available by Sprott Resource Lending Corp.

The estimated coal sales, projected market conditions and potential development disclosed in this news release are considered to be forward looking information.  Readers are cautioned that actual results may vary from this forward-looking information.  Actual sales are subject to variation based on a number of risks and other factors referred to under the heading “Forward-Looking Statements” below as well as demand and sales orders received.

Certain information set forth in this press release contains “forward-looking statements”, “forward-looking information” and “future oriented financial information” (collectively, “forward-looking statements”) under applicable securities laws. Except for statements of historical fact, certain information contained herein relating to projected sales, coal prices, coal production, mine development, the capacity and recovery of Corsa’s preparation plants, expected cash production costs, geological conditions, future capital expenditures, expectations of market demand for coal and the effectiveness of the amending agreement to the Credit Agreement constitutes forward-looking statements which include management’s assessment of future plans and operations and are based on current internal expectations, estimates, projections, assumptions and beliefs, which may prove to be incorrect. Some of the forward-looking statements may be identified by words such as “estimates”, “expects” “anticipates”, “believes”, “projects”, “plans”, “capacity”, “hope”, “forecast”, “anticipate”, “could” and similar expressions. These statements are not guarantees of future performance and undue reliance should not be placed on them. Such forward-looking statements necessarily involve known and unknown risks and uncertainties, which may cause Corsa’s actual performance and financial results in future periods to differ materially from any projections of future performance or results expressed or implied by such forward-looking statements. These risks and uncertainties include, but are not limited to: risks that the actual production or sales for the 2018 or 2019 fiscal year will be less than projected production or sales for this period; risks that the prices for coal sales will be less than projected; liabilities inherent in coal mine development and production; geological, mining and processing technical problems; inability to obtain required mine licenses, mine permits and regulatory approvals or renewals required in connection with the mining and processing of coal; risks that Corsa’s preparation plants will not operate at production capacity during the relevant period, unexpected changes in coal quality and specification; variations in the coal mine or preparation plant recovery rates; dependence on third party coal transportation systems; competition for, among other things, capital, acquisitions of reserves, undeveloped lands and skilled personnel; incorrect assessments of the value of acquisitions; changes in commodity prices and exchange rates; changes in the regulations in respect to the use, mining and processing of coal; changes in regulations on refuse disposal; the effects of competition and pricing pressures in the coal market; the oversupply of, or lack of demand for, coal; inability of management to secure coal sales or third party purchase contracts; currency and interest rate fluctuations; various events which could disrupt operations and/or the transportation of coal products, including labor stoppages and severe weather conditions; the demand for and availability of rail, port and other transportation services; the ability to purchase third party coal for processing and delivery under purchase agreements; and management’s ability to anticipate and manage the foregoing factors and risks. The forward-looking statements and information contained in this press release are based on certain assumptions regarding, among other things, coal sales being consistent with expectations; future prices for coal; future currency and exchange rates; Corsa’s ability to generate sufficient cash flow from operations and access capital markets to meet its future obligations; the regulatory framework representing royalties, taxes and environmental matters in the countries in which Corsa conducts business; coal production levels; Corsa’s ability to retain qualified staff and equipment in a cost-efficient manner to meet its demand; and Corsa being able to execute its program of operational improvement and initiatives. There can be no assurance that forward-looking statements will prove to be accurate, as actual results and future events could differ materially from those anticipated in such statements. The reader is cautioned not to place undue reliance on forward-looking statements. Corsa does not undertake to update any of the forward-looking statements contained in this press release unless required by law. The statements as to Corsa’s capacity to produce coal are no assurance that it will achieve these levels of production or that it will be able to achieve these sales levels.