“2017 has been a year of tremendous growth and record profitability for Corsa, driven by strong volume growth across all of our metallurgical segments as well as a healthy pricing environment,” said George Dethlefsen, CEO of Corsa. “We plan to continue growing rapidly in 2018 as our Acosta mine reaches full production and as we begin production at the Horning mine.  In 2018, we are guiding towards metallurgical coal production growth of over 60% and an overall increase in premium low volatile metallurgical coal sales of over 50% as compared to 2017 forecasted levels.

Our priorities for allocating free cash flow include metallurgical coal production growth and investing in our mining equipment to position the company for the future.  Our 2018 capital expenditure program is focused on growing production from existing mines, new mine development, maintenance capital at existing operations and maintaining our preparation plants to support the Company’s goal of doubling low volatile metallurgical coal production over the next two years.

The global supply and demand fundamentals for metallurgical coal remain very positive.  The steel industry is enjoying high levels of production growth and profitability, and on the supply side, premium quality metallurgical coal remains in a supply deficit.  We have built a diversified sales order book with exposure to Pacific basin prices, U.S. East Coast pricing and fixed prices domestically.  With metallurgical coal prices at profitable levels and our growth story continuing to move forward, Corsa is well positioned for another outstanding year ahead.” 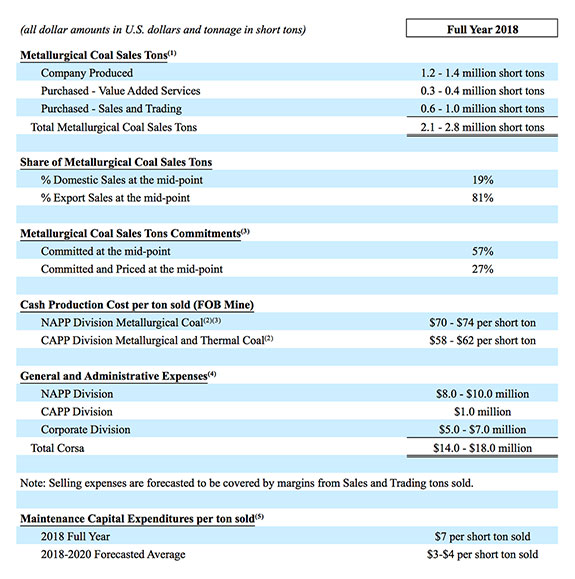 The 2018 budget is focused on mine development, preparing our operations for higher volumes and upgrading equipment to help lower operating costs in 2018 and beyond.  Production growth is expected to assist in Corsa achieving the benefits of scale, which in turn, will help lower our all-in sustaining cost structure through fixed cost absorption.

Company Produced tons is historically the Company’s highest margin segment and in 2018, we plan to increase metallurgical coal production volumes by 60% over expected 2017 levels. We expect to benefit from increased production from a full run rate at the Acosta mine, contribution from two new surface mines and production from the Horning mine beginning in the first quarter.

Growing into its infrastructure is a priority for the Company in 2018 and part of its long-term growth plans. The Company’s processing plant facilities have the capacity to double throughput with increased volumes from our company produced tons and value-added services tons. Planned growth from these two segments is expected to drive higher volumes at our processing plant facilities and increase utilization rates. Corsa has four million tons of annual processing capacity at its Northern Appalachia, or NAPP, Division connected to rail sidings on both the CSX and Norfolk Southern railroads. Purchasing coal locally and then storing, washing, blending and loading the coal generates margin, as Corsa uses its customer relationships, infrastructure and logistics capabilities to enable regional producers to access the export market.

In addition to income from Corsa’s Value Added Services purchased coal segment, Corsa also expects to generate $4.0 to $6.0 million of additional income in 2018 through toll washing, the sale of mining and coal processing by-products and from mineral royalties.

In 2017, Corsa launched its Sales and Trading platform.  Corsa’s metallurgical coal sales have tripled in 2017 and sales revenues are up 247% year to date through September 30, 2017.  The Sales and Trading segment provides significant intangible benefits that help the Company drive volume growth and increase its presence in the seaborne market, as well as in the domestic purchased coal market.  This helps the Company offer its customers a wide range of coal qualities and creates a margin stream that Corsa believes will be available in any pricing environment.

Sensitivity to Changes in Price

The graph below illustrates the sensitivity to Adjusted EBITDA(1) as seaborne prices move.  As a guideline, for 2018, Adjusted EBITDA changes by approximately $7.0 million as average realized seaborne prices change by $10 per metric ton.  Current prices for premium low volatile metallurgical coal on the East Coast of the United States are $197 per metric ton (the index that represents the majority of Corsa’s export sales) and on the East Coast of Australia are $236.50 per metric ton.

(1) This is a non-GAAP financial measure.  See “Non-GAAP Financial Measures” below. 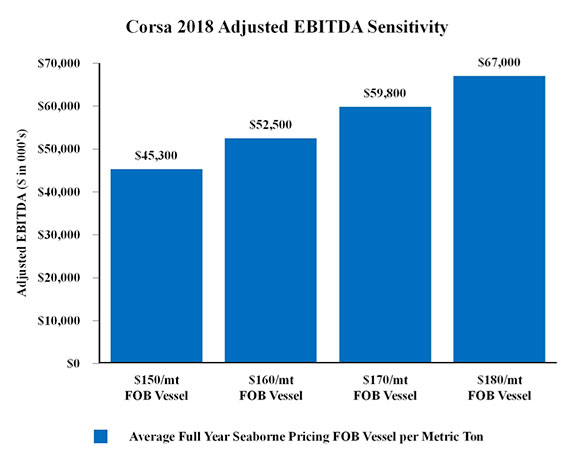 To convert from a price that is in metric tons at a port (the commonly quoted published prices) to an FOB Mine price, a metric-to-short conversion must take place (10% reduction), as well as the removal of rail freight which historically has averaged between 15-17% of the FOB Terminal U.S. East Coast Low Vol HCC price per metric ton.

Forward-Looking Statements
Certain information set forth in this press release contains “forward-looking statements” and “forward-looking information” under applicable securities laws. Except for statements of historical fact, certain information contained herein relating to projected sales, coal sales prices, coal production, mine development, adjusted EBITDA, the capacity and recovery of Corsa’s preparation plants, expected cash production costs and other cost margins, additional sources of income (including toll washing, the sale of mining and coal processing by-products and from coal royalties), geological conditions, future capital expenditures and expectations of market demand for coal,  constitutes forward-looking statements which include management’s assessment of future plans and operations and are based on current internal expectations, estimates, projections, assumptions and beliefs, which may prove to be incorrect. Some of the forward-looking statements may be identified by words such as “estimates”, “expects” “anticipates”, “believes”, “projects”, “plans”, “capacity”, “hope”, “forecast”, “anticipate”, “could” and similar expressions. These statements are not guarantees of future performance and undue reliance should not be placed on them. Such forward-looking statements necessarily involve known and unknown risks and uncertainties, which may cause Corsa’s actual performance and financial results in future periods to differ materially from any projections of future performance or results expressed or implied by such forward-looking statements. These risks and uncertainties include, but are not limited to: risks that the actual production or sales for the 2018 fiscal year will be less than projected production or sales for this period; risks that the prices for coal sales will be less than projected; liabilities inherent in coal mine development and production; geological, mining and processing technical problems; inability to obtain required mine licenses, mine permits and regulatory approvals or renewals required in connection with the mining and processing of coal; risks that Corsa’s preparation plants will not operate at production capacity during the relevant period, unexpected changes in coal quality and specification; variations in the coal mine or preparation plant recovery rates; dependence on third party coal transportation systems; competition for, among other things, capital, acquisitions of reserves, undeveloped lands and skilled personnel; incorrect assessments of the value of acquisitions; changes in commodity prices and exchange rates; changes in the regulations in respect to the use, mining and processing of coal; changes in regulations on refuse disposal; the effects of competition and pricing pressures in the coal market; the oversupply of, or lack of demand for, coal; inability of management to secure coal sales or third party purchase contracts; currency and interest rate fluctuations; various events which could disrupt operations and/or the transportation of coal products, including labor stoppages and severe weather conditions; the demand for and availability of rail, port and other transportation services; the ability to purchase third party coal for processing and delivery under purchase agreements; and management’s ability to anticipate and manage the foregoing factors and risks. The forward-looking statements and information contained in this press release are based on certain assumptions regarding, among other things, coal sales being consistent with expectations; future prices for coal; future currency and exchange rates; Corsa’s ability to generate sufficient cash flow from operations and access capital markets to meet its future obligations; the regulatory framework representing royalties, taxes and environmental matters in the countries in which Corsa conducts business; coal production levels; Corsa’s ability to retain qualified staff and equipment in a cost-efficient manner to meet its demand; and Corsa being able to execute its program of operational improvement and initiatives. There can be no assurance that forward-looking statements will prove to be accurate, as actual results and future events could differ materially from those anticipated in such statements. The reader is cautioned not to place undue reliance on forward-looking statements. Corsa does not undertake to update any of the forward-looking statements contained in this press release unless required by law. The statements as to Corsa’s capacity to produce coal are no assurance that it will achieve these levels of production or that it will be able to achieve these sales levels.